Stripping Of Nationality As A Weapon Of Political Suppression: The Cases Of Bahrain, United Kingdom, United Arab Emirates and Kuwait

Home
Bahrain resources
Stripping Of Nationality As A Weapon Of Political Suppression: The Cases Of Bahrain, United Kingdom, United Arab Emirates and Kuwait 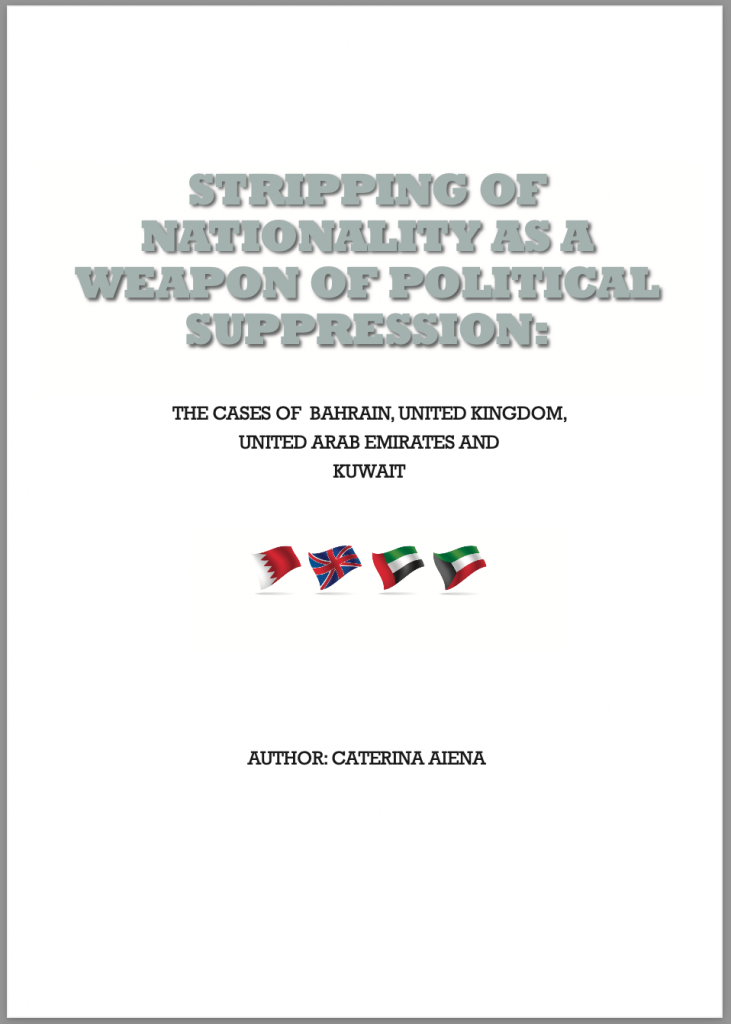 This report was prepared by Caterina Aiena for UJN’s CED Project.

This report aims to reflect on the legal phenomenon of denationalisation as a political weapon against targeted groups of people who are excluded from the entire state system, on the grounds of their political, cultural or religious affiliation. The creation of stateless people by nation states is becoming a widespread phenomenon with global dimensions.

The purpose of this paper is thus essential to reflect on the risk of arbitrariness embedded in this asymmetrical hierarchical relationship of powers, in which governments decide who is a threat to security or not. In this regard, the cases of the UK, Bahrain, United Arab Emirates and Kuwait have been selected to give an example of how the legal phenomenon of denaturalisation affects different countries and has acquired a more global dimension.

The first part of this article attempts to draw out the key commonalities of this phenomenon, such as for instance, the people against whom such orders are issued, or the motivations behind such orders based on a perceived lack of loyalty to the state, and the ways in which such powers have been normalised. Indeed, all deprivation orders can be made by the respective Minister of Interior with no judicial approval in advance, violating the fundamental right of individuals to their citizenship.

Further, in the second part of this paper, all the above-mentioned countries are dealt with in more detail by describing the political background against which the controversial laws on nationality emerged.

The report concludes by expressing deep concerns about the arbitrary nature of the power to revoke citizenship. Depriving people of citizenship by making them stateless has a devastating impact on their lives.